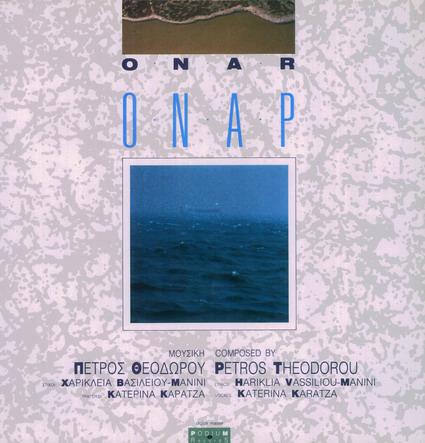 A composition for electronic instruments and voice. It is my 1st LP album (1989); a personal initial proposal for the use of music technology means. This work participated and was awarded a prize at the “Soundscape” Pan-European Competition of Musical Composition and Technology (Norwich, Great Britain). Lyrics by Hariklia Vassiliou. Sung by Katerina Karatza. Later it reappeared in a CD form (in 1995) along with my 2nd LP album, “Beatrice”.
**info on ONAR and all audio files

A composition for the stage performance of the same title. The first co-operation with actress/director Tina Stephanopoulou and an initial exploration of connecting music-sound and theatrical text, within a form where the two elements are equivalent, where neither feature plays an accompanying role.
**some of these audio files are in the beginning of the 4th playlist of my compilation

A composition that combines electronic and acoustic instruments (guitar, violoncello), dedicated to the great scientists who established the Chaos Theory (1992).
**there are no audio files here

Topos-2 or Paradise Has No Apple Tree

A composition for a series of works by painter Herman Blaut. A only 15min piece but of decisive importance. As a continuation of the problematics about music technology that started with “Onar”. As a clear view about relating music with fine-arts. As the core of the dance / theatre performance “Isimeries”.
**the audio files of this piece are available at the playlist in the page of  MUSICA PRACTICA (CD)
**info about the dance/theatre performance, its theme and “story”

A work for voice, guitar and violoncello. My 2nd LP album. Lyrics by Hariklia Vassiliou, Christina Mitsani, Tina Stefanopoulou. Sung by Spyros Sakkas. “Beatrice” was published on 1995 as a CD together with “Onar”. It is also the first part of a broader work, entitled “Two love cantatas” (the second part is “3000 Years of Being in Love”, which never appeared in the discography).
**info on BEATRICE and all audio files

A composition in a cantata like form for piano, flute and voice dedicated to Spyros Sakkas (1993). It was presented at live recitals (sung by Sakkas) along with “Beatrice” under the title “Two Love Cantatas”. Lyrics – libretto by Stephanos Rikoudis.
**there are no audio files here 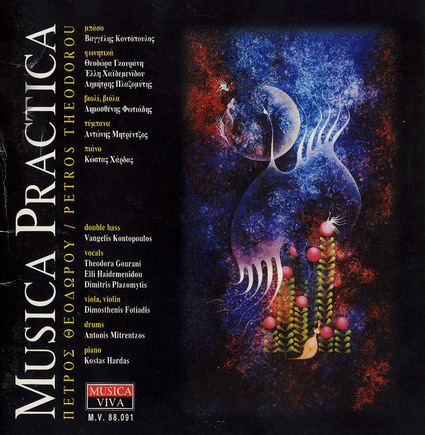 A work based on my attempt to form a personal proposal for a creative approach of music technology, a route that started with “Onar”. With this work I developed my concept of “Musical Praxis – Action”. I created a series of pieces with no aesthetic prejudices using electronic sound with no prejudices regarding the stylistic freedom. 3rd discography (CD -1995).
**info on “MUSICA PRACTICA” and all audio files

The Network, or: the murderous power of advertisements

An experimental work for pre-recorded music, the personae of a television interview and a dancer; presented live by ET3 TV (1996). Scattered recorded radio advertisements “kill” 3 well known arias…
**the audio file is at the page with compositions from selected works

Music for the stage performance of the same title by the State Theatre of Northern Greece (1996, directed by Dimitris Karellis, stage constructions by Vassiliki). Elements of Byzantine and Church music are used in combination with pre-recorded samples of digitally processed pieces.
**there are no audio files here

The Devil with the Candlestick

A work for guitar and voice based on poems by Tassos Leivathitis (1996). An innovatory combination of guitar and voice, with a strong, deeply introverted atmosphere and many special interpretative requirements. Dedicated to the guitarist Thimios Atzakas and the singer Maria Thoidou who first performed the work.
**there are no audio files here

A composition based on a series of paintings by Christina Mitsani (1996).
**the audio file is at the page with compositions from selected works

A series of three stage pieces including music, dance and painting. They were completed between 1996 and 1998 in co-operation with dancer / choreographer Efi Tsolakidou. With this work I connected deeply with the dance field, attempting to combine creatively my music with other forms of art.
**The audio files of one of ISIMERIES (Topos-2 or: Paradise has no apple tree) are available at the playlist in the page of MUSICA PRACTICA (CD)

A work for a dancer, a “Theremin” (the monumental electronic instrument in the beginning of the century), and pre-recorded music made up exclusively by Theremin samples. This experimental piece was completed in co-operation with dancer Efi Tsolakidou (1997) as a tribute to the exceptional personality of its inventor, Leon Theremin.
**there are no audio files here

A composition of spoken text and sound based on a Dionysios Solomos’ story (text interpreted by the actor Dimitris Karellis (1998). This work is structured on the classical radio-theatre style (yet, in this case there is a monologue, regarding the text). The music is all original, implying numerous samples very subtly and thoroughly elaborated. The sound part is not simply a mood-decorative “sound-carpet” for the voice, since it is composed to follow very closely the narration. The whole idea of such a kind of work was much further developed later, in my last composition, which was the audio part of the project “Ars Moriendi”.
**some of these audio files are at the page with compositions from selected works

A work composed to support the performance of the same title by the State Theatre of Northern Greece in October 1998. Directed by Dimitris Karellis.
**there are no audio files here

This work was officially released in a CD form in 1999 when I developed further a composition of 1995. At that time I had the idea of creating an independent performance based on this tragedy that would be structured with just sound and movement without words, a project similar but much more ambitious than “Isimeries”.

During the next 4 years I wrote the fully detailed sound/movement performance “script”. I cooperated for this purpose partly with the dancer Efi Tsolakidou. I completed the musical part developing much further that first version of 1995, transforming it in a stand-alone work which is my 4rth discography (CD, 1999).

During the same year (1999) I co-operated with dancer choreographer Amalia Strinopoulou working on the pre-existing conceptual core of the complete performance. The final result, entitled “Myth fragments: Phoenisses”, was presented at the “Dimitria festival – 1999”.

This work is a definitive turning point in my composing style and my perspective on music technology (a pathway that opened with “ONAR” and went on with “MUSICA PRACTICA”). Furthermore, this work, is a personal approach on aesthetic and stylistic references to the Greek traditional sound.
**info on the PHOENISSES (CD) and the dance/theatre performance & all audio files
**photos of the performance

This work is my 5th discography, and his my composition, before focusing on Gestalt therapy.

It consists of a SOUND part and a VISUAL one. Both of them, are integrated in a broader idea, the Ars Moriendi multimedia PROJECT. This project was to be realised supported by the Thessaloniki Municipality, but was finally never produced.

The Ars Moriendi SOUND part consists of a story unfolding along with music and some autonomous vocal pieces. This sound part of the work, appeared in an autonomous CD format.

The Ars Moriendi VISUAL part was created in the computer from about 350 scanned paintings and photos. The same visual part appears within the form of (a) slides and the form of (b) images.

The slides are projected while the sound part is heard. The images can be exhibited independently from the rest of the presentation. As a “stand alone” conceptual content, they are different than the original work’s one. Whenever were presented in an exhibition, they were entitled “…the dream of a city that no longer remembers breathing…” since the idea of the city and the urban environment are its main themes.
**info on ARS MORIENDI and all the project’s audio files
**the images of the project’s visual part

Many of his works, mentioned as well as unmentioned above, are associated with drama and dance performances or experimental stage actions and other events, such as the musical accompaniment of short films and numerous documentaries. His works have been presented at recitals, performances as well as on the radio and television, mainly in Greece and sometimes abroad.