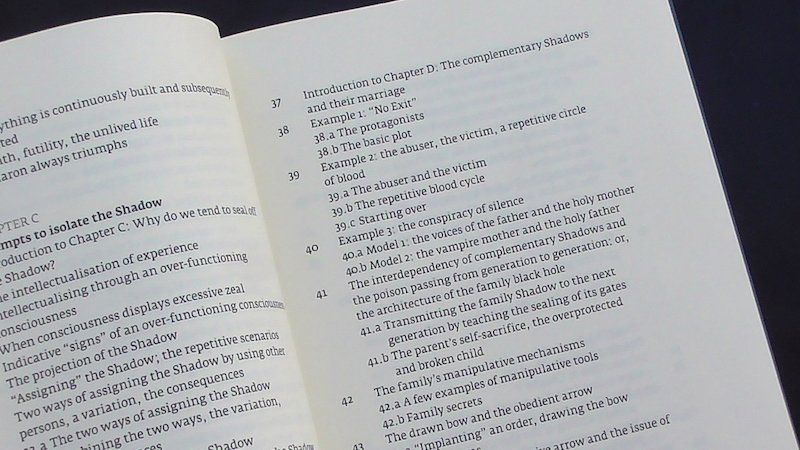 » BOOKS » SHADOW: THE SILENT COMPANION THROUGH OUR LIFE'S JOURNEY » b. overview from all Chapters & table of contents » SHADOW: Table of Contents

i.1   What is this book about and to whom it is addressed​​?

i.2   A brief history, and a few words on the motivation and intentions of this ​​publication

i.3  The “sub-text” of the ​Quotations and other attributes of the book

2.   More on the Shadow and connecting it with the concept of “​unfinished ​business”

3.a   The embodied primary self: the mysteries and the basement of “I am​”​​

3.b   Consciousness: the penthouse of “I am”

3.c   Self as the housekeeper of “I am”: its aspects and the importance of the ​​Shadow

5.   The Shadow, and the delusion of fully re-living the past​

5.a   The uniqueness of our moments​

6   The power of the Shadow, holism, and self-organisation​

6.a   The Shadow’s effects in our course through life: an approach based on coral principles of “holism”

6.b   The threatening Shadow

9    What might be the “self” and the Shadow of a relationship​?

11   What we cannot do for our inner child

12.a   The  misfortunes of the monstrous and the ​​deformed

13   Introduction to Chapter B: The ancient and recent material stored in the ​​Shadow

14   On the distant origins of the Shadow: the eyes in which I was ​​mirrored

14.b   The tremendous importance of the mother for the early construction of the ​​Shadow

14.c   Creativity and the Hall of distorting ​​Mirrors

15   Interlude to Chapter B: Feeding the Shadow in adulthood and our “existential givens”​

16   Shadow, our uniqueness and our ​loneliness

16.a   Existential and interpersonal ​loneliness

16.b   Who is it that we would like to ​believe condemned us to a solitary existence​?

17.b   Meaning, the need for control and the ​Shadow

18   Armouring the Shadow when things insist on resisting

19   The Shadow, the relativity and ephemerality of meanings, the “fertile void​”

20   The Shadow, personal responsibility for choice, and the question of “​morals​”

21   The Shadow and the lower layers of our ​​nature: are we responsible for our primary emotions?

22   The Shadow, our differences, the rules that govern our collective ​life

22.a   General systems of beliefs and ​values

22.b   Fast-food meanings and their consequences for the reinforcement of the ​Shadow

24   Shadow and the one-way betrayal of ​death

24.a   Everything is continuously built and subsequently deleted​​

25  Introduction to Chapter C: Why do we tend to seal off the Shadow​?

26  The intellectualisation of experience​

27  Intellectualising through an over-functioning consciousness​

29  Indicative “signs” of an over-functioning consciousness​​​

30  The projection of the ​Shadow

31 “Assigning” the Shadow; the repetitive ​scenarios

32  Two ways of assigning the Shadow by using other persons, a variation, the ​consequences

32.a   The two ways of assigning the Shadow​

32.b   Combining the two ways, the variation, the consequences​

33.  An example of assigning the Shadow

34  Relationship: projecting and assigning the ​Shadow

35  The happy and unhappy end of repetitive scenarios in fairy tales, and in ​​life

37   Introduction to Chapter D: The complementary Shadows and their marriage

39   Example 2: the abuser, the victim, a repetitive circle of blood​

41 The interdependency of complementary Shadows and the poison passing from generation to ​generation: or,  the architecture of the family black ​hole

41.a  Transmitting the family Shadow to the next generation by teaching the sealing of its ​gates

41.b   The parent’s self-sacrifice, the overprotected and broken ​child

42.a   A few examples of manipulative ​tools

43   The drawn bow and the obedient ​arrow

43.c   The prayer of the captive arrow and the issue of​ ​responsibility

44   Shadow and the concept of “creative adjustment”

46   The Shadow itself as a creative adjustment

47.a   The child who is always wrong, and the idea of “magical ​thinking”

47.b   The adult sense of “error” as an echo from the Shadow and the roots of our adult need for explanations

50   The Shadow and the miracle of embodied existence

51   The Shadow and our sense of our temporal continuity

51.a   The paradox of the continuous reconstruction of time

51.b   The Shadow affecting our subjective timeline

53.b   The 3rd way to avoid the Shadow: The compulsion to positive thinking

55   The present as a solid background to our connection with the past, but not the past as a model for life in the present

56   The importance of “the paradoxical theory of change”

57   Embracing our inner child: the other, the alternative end to the happy end in fairy tales

58   The Shadow, a dish of fruit and a distorting ​mirror

59   Our story is our story: the inevitable cold that we sense when we open the door to our inner child

60   The inner child, the trap of forgiveness, and the inevitable encounter with ancient ​anger

61   The sensitive matter of apology and forgiveness

62   The trap within the phrase “I’m finished with that; this issue is closed”: the present holding onto the ​past

64   The importance of the first steps: getting out of the comfort zone

********APPENDIX Ι*** Existential angst, unfathomable depths, “the paradoxical theory of change” and the wisdom of Sisyphus

A.0   The purpose of this appendix

A.1   Life’s injustices and sinking into fathomless depths

A.2   Surrendering to the fall

A.3   The “experiential factory”: substituting “but” with “and”

A.4   How surrendering to the void might stop the fall​

A.5   “Trusting the process” – what could good or positive mean​?

A.6   The hallucination of the saviour

A.7   Sisyphus and his wisdom: a suggestion about acceptance