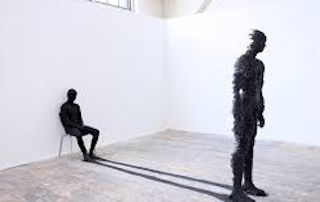 » BOOKS » SHADOW: THE SILENT COMPANION THROUGH OUR LIFE'S JOURNEY » c. excerpts from the book & videos on the "Shadow" » Limbo -the endless isolation of our inner child in the basements of our childhood

We have seen in my proposal for the idea of the Shadow,

that this term may be used to describe (a) generally isolated aspects of our potential (important “unfinished business” – in the sense of incomplete and highly emotionally charged experiences of the past), (b) more specifically, our exiled inner child (meaning unfinished business from our childhood).

The core idea of this proposal connects with various symbolisms created by the collective mind of our species – symbolisms that I think they are very clearly expressed in several forms and variations in all traditions.

I feel honour bound to devote a few lines here, as a kind of elegy, to how such symbolisms are manifested in legend, myth and of course in art. (An “elegy” is a work of lyrical lamentation).

Those of our aspects that are in the Shadow

(the oldest of which constitute the inner child) could be seen, metaphorically, as somewhat like the creatures we see in horror films and which inhabit the stories, myths and traditions of every culture, under various names.
Creatures in such stories and traditions often appear to be trapped between our own dimension and some other undefined dimensions belonging to imaginary universes; as if they were eternally suspended in the Elysian Fields, in Lethe’s grey country, or in some other eternal heavenly antechamber or Limbo, condemned to endless waiting, able neither to materialise in our world nor to depart for some other reality and find peace.

without knowing what or who will bring an end to it, or how.
They have the form of mysterious spectral entities haunting places that remain charged with the energy of great and extreme events: haunted houses or forests, scenes of violence, of massacre or other crimes.
To us, they manifest their existence by displacing objects, switching lights on and off, opening and closing doors, or sometimes by blind destruction – just because they are looking for something, waiting for something.

Further, in the pseudo-philosophy accompanying most religions, we see demons taking possession of human bodies; in literature and in the cinema, ghosts and spirits haunt abandoned houses, or even occupied homes, spreading terror.

I think that we may reasonably see symbolic analogies between these supernatural creatures and those aspects of our selves that are locked up in the Shadow.

Furthermore, I would see the power of these entities as analogous to the emotional power of aspects of the self alienated in the Shadow – emotions which have been formed to accompany those aspects of self but finally remained trapped as suspended energy.

Another possible analogy between the idea of the Shadow and traditions that speak of such creatures is the following: the fundamental mood in movies or books with stories of this kind usually has to do with fear and horror, mixed with distant echoes of a bittersweet nostalgia.

For me, this mood seems very similar to what we feel

when we sense the echoes from our Shadow; we are touched by the nostalgic atmosphere of a distant childhood and, at the same time, we are terrified by what might be lurking in there.

Moreover, such metaphors might prompt us to see werewolves, vampires and various other dark creatures from world mythology as symbolic, polarised, dark aspects of the self: as undesirable versions of ourselves, threatening whichever other aspects of our selves are considered normal and useful to the needs of our normal everyday collective life – that is, to the survival of our species.

Such dark symbolic creations are also encountered in literature.
One example is “Cthulhu”, a fantasy world in the work of the American horror writer Howard Phillips Lovecraft (1890-1934).
Chthonic deities are trapped in the bowels of the earth and the depths of the ocean, awaiting the right conjunction of events so that they may reappear and swallow up the world.

Furthermore, the medieval era – a time of incest,

alcoholism and many other factors which favoured mutations – produced gothic horror stories in which families, usually aristocratic, kept deformed children locked up in the attic or the cellar – not that this phenomenon has disappeared in our times …

In many stories set in this era, such children, imprisoned in towers or dungeons, find a way to escape by night to destroy and kill – doing as demons and ghouls do. They commit various crimes, something analogous to what we fear our “evil” Shadow may do when we do not guard its gates effectively; some Shadowed aspects of ourselves are made manifest in our everyday life, capable of destroying our good positive self-image.

For the sake of clarity, in this metaphorical domain

while talking about the Shadow and the inner child (as we suggested in section 10), I would say that those children are themselves terrorised.

I note that the metaphor of serene, redeeming sleep corresponds

to the functional balance which is sought by our wholeness, if we see ourselves as a system attempting to distribute our life energy more evenly, instead of wasting this energy in the maintenance of our schism from our Shadow.

Indeed, maintaining this separation, in order to isolate some past experiences, means expending a large part of our life energy, which could be spent on rich experiences in the “here and now”. This is why, in the case of a large and frozen Shadow, something inside us is always left unsatisfied, anxious about the steps we take through life; this is the hidden aspect, the silenced voice of our Shadow that corresponds to our eternally unsatisfied ghosts.

To make an analogy: if our existence were a modelling wax

that could be twisted at will into various shapes while we are freely experiencing our here and  now, our ghosts would be little stones embedded in the wax, which prevent us from giving it whatever shape we wish.

Generally speaking, writers and directors metaphorically presenting our terrors of a large and frozen Shadow in their works have displayed vast imagination. Dolls and toys that transform themselves into psychopathic killers: birthday parties with festively dressed skeletons: Quasimodo: the monster that Dr. Frankenstein created: gigantic robots, monstrous but maybe benign, in countless science fiction stories. These are just a few of the literary symbols of the embodiment of our Shadowed aspects.

Of course, in such stories, the stronger the symbolic split between our conscious “beautiful/visible” and our Shadowed “ugly/hidden” aspects, the more catastrophic the split. This process of destructive splitting is set out marvellously in Oscar Wilde’s novel “The Picture of Dorian Grey” (2000), as also in Robert Louis Stevenson’s “Dr. Jekyll and Mr. Hyde” (1993).

And now, going back to the analogy between our Shadowed aspects

self and the deformed imprisoned children, I would say that we often interpret the despairing voices of these children as the howling of monsters and we push them further down into the deeper levels of our Shadow.

Or, whenever we are forced to let them out for a bit so as to quieten their cries, we use large amounts of makeup to distort them into unreal dolls, into good and acceptable boys and girls, in an attempt to cover up the ugliness that we ourselves see in them through our own adult eyes.

The voices of our aspects from within the Shadow are indeed sometimes catastrophic, when they take total control of our actions. They are, though, like children to whom no one has ever taught life skills, boundaries. and mutual respect – besides, to their ignorance is added the blind anger born of their  isolation, unjust as they see it.

The fear, the denial and the rejection that we once felt because of the responses of the environment to our needs, were reasons for which we once alienated some child-aspects of ours.
If asking for tenderness and attention resulted in violence and indifference, those aspects of ours that asked for tenderness and attention were isolated in the Shadow, because they were threatening – associated with violence and indifference.
However, we moved ahead. By becoming adults we changed, but for these aspects of ourselves time stopped; it froze, and the emotions that accompanied such aspects remain still pending, like a silent scream.

So, the Shadow is experienced as a horrific, deformed and autonomous entity (beyond our conscious control), hostile and threatening.
And we are ruled by the sense that whenever the Shadow overflows, whenever we are overwhelmed  by those well-buried aspects, then we become ugly and catastrophic, to ourselves and to others.
So the Shadow needs to be sealed hermetically. (See sections 6a, 6b, 26, 27, 28 on the over-working intellectualising mind and our exaggerated need for control).

Finally, one might wonder what will become of these deformed children and the ghosts within us, and how could we ever start a dialogue with them. (Of course, in our metaphor, to approach them is in essence a search for a functional relationship with our Shadow).
However, for now, let us be patient; in the next sections, let us get to know more about our Shadowed aspects.