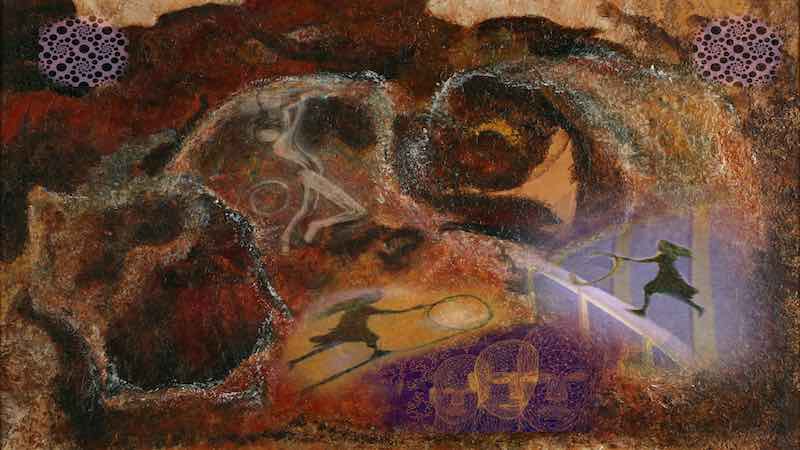 ❓“Share*Dots project” is an experimental series of online interactive meetings

with FREE ADMITTANCE. It is actually an invitation for 2 hours autonomous meetings. Their GOAL is not psychotherapeutic.
The participants SHARE (optionally) ideas, thoughts, feelings, questions, impressions, inspirations or whatever else came up by watching the video or reading the text with the THEME of each meeting.

🕵️‍ Psychotherapist and writer Petros Theodorou co-ordinates the event (it is a volunteering activity).

🎥  In ALL the events of this series the THEME of each autonomous meeting will have been ALREADY uploaded a few days before the meeting, in a video or in text. It will have been shared through an event in fb as well as a newsletter.

The origins: a double “personal film”

This project started to come up when in a video group meeting I was seeing faces and faces in the screen thinking once more how different this experience is from the one realised through physical presences.

At some moment I had two surrealistic images emerging all of a sudden (such images, in a dream-like form of a “snapshot” of inner processes, I call “personal film” in my PSP approach).

was a bodiless face floating in nothingness and talking to the void, yet somehow knowing and sensing that is heard by some other vague presences dispersed somewhere around. The “face” sensed a warm feeling that was produced by this awareness, even in nothingness and this feeling was precious for the talking face.

was of a “theatrical” touch: People sitting in rows like audience, then a man gets up, steps in front facing a vast and totally empty space in front of him while keeping his back to the audience. He starts talking-singing a wordless motif – a strange sound coming from his throat.
This man was aware of people behind his back and he knew that he was being heard by them, while he was facing emptiness in front of him. I somehow identified a little with him and the feeling was big fear for the vast emptiness in front and a lot of warmth coming from the people behind, even if they could not be seen being behind the man’s back.

In both these images,

the very big contrast of void with the warmth produced by the awareness of “I am heard by someones” had for me a strong existential texture.
Besides, “being heard and seen” represents for all humans the fundamental need to be reflected, even if this reflection by others is not concrete. Someone in prison finds soothing the simple sound of “toc-toc” at the wall by the other prisoner at the next cell, even if he has never seen his face.

I thought much about these images and at the moment they emerged and I focused on this:

in video meetings, one cannot have the sense of the others in “3D” around her/him, and the sound is not coming from sources spread all around.
Of course, needless to say that there are many other differences between video and physical meetings, like the missing of the countless non-conscious elements emerging anyhow during any physical encounter between people, and so on.

In any case, in video meetings, the Others are just in front of each one participant and the sound is always from the same source and direction.

I think that the usual 3D perception

in a physical meeting creates the sense of tangible spatial structures around (thus “anchor points”, like co-ordinates necessary for grounding one’s self in the experiential flow).

So, when we lose the 3D perception, even if we see faces on screen, a kind of void is always produced, like in the void of my double “personal film”.
If we know well the other person (or persons) this void is somehow filled by projecting through imagination whatever we have stored in our memories and inner world about the other person (or persons).
But within a video meeting with more participants, and when especially many of them are unknown to us, things change and we cannot so easily fill the gaps by the loss of our 3D perception. Thus, a sense of void is more or less produced.

How the idea of Share*Dots project took shape.

The following points make up the structure of the Share*Dots project idea.

***** Based on the above fundamental

characteristic in video meetings,  I thought: what if I devise a meeting format in which this contrast of void and warmth would be pushed to the limits?
What if in such a format are erased even more elements that create our grounding in the usual group – processes? – I mean initial round of introduction, feedback by the participants in each one sharing, then closing round, etc.

saying that they needed very much even a simple framework giving to them just the opportunity to open and share in a few words their experiences in the huge changes because of the pandemic. They were saying that just some organised sharing would be a big gift for them.
So, such a framework that would be firmly co-ordinated in order to create safety, might be a useful idea.

*****In internet there is a huge amount of offer regarding support,

of advices on what to do in this virus-period and quarantine, etc. For me, not all of this huge amount of offers is valid for several reasons, but for sure many people found substantial support and help.
Especially in the covid-19 times, offering support is for sure an effective kind of first-aid emergency intervention.

*****Nevertheless, in my own way of thinking, big crisis always sometime enter a second step.

This “next” phase is characterised (a) by action (praxis) and (b) by personal responsibility of choices.

And as we enter on the “day after” period of the pandemic, this second step has absolutely to emerge into awareness otherwise we shall get stuck in an extended original emergency state.

This means that staying just with “too much” support of the first-aid emergencies may become an “over-sugared” situation, risking to keep the receivers passive, like overfed babies.

Besides, I think that our times (even before the virus) have a violent, brutal and cruel aspect behind the smiles in social media.
So, trimming awareness towards a responsibly active stance is anyway important in our times, especially since the pandemic.

I prefer to devise my personal contribution rather towards a kind of “warrior format”, attempting to inspire people for responsibly taken action and this is the way in which the Share*Dots project emerged.

From the very first moment I knew that it was NOT at all to be of a psychotherapeutic format and this would be made clear to the participants.

I thought of it mainly characterised by a powerful existential sense, realistic to our times and similar to the one in my personal film. Besides, beautiful therapy video groups are countless all around and one may go to one of these groups to work in a different way.

Share*Dots project emerged as an online call to people to simply share, talking about whatever they wish to talk, having in mind that the theme of each meeting will have been briefly presented in an already, before the meeting, uploaded video.

Watching the video beforehand the meeting,

then grasping the video’s theme and reflecting on it, is already a “praxis” requiring personal responsibility and choice – especially if we think that in our times people watch barely just 3-5 sec of videos.

Then, regarding the meeting, in my structuring I on purpose skip

the initial round of introductions – and this is why I leave the meeting open to as many participants may come (till the start of the meeting). I only do some quick refreshing of the meeting’s concept, just before the sharing.

So, without any special preparations, someone starts sharing not to three-dimensional physical presences but only to faces on a screen.
This symbolizes the “talking to the void” (see the “personal films” that I described at the beginning of this text).

The fact that who shares is aware of other people “there”

willing to listen to him/her, connects with the warmth that one may receive by Others in hard situations that do not permit concrete signs of response (this too has to do with the sense of the “personal films”).
And I see all this process fitting well with the harshness of our days:

I mean that in these days we have to take the risk
to open, to send our message to emptiness while intuitively trusting that “in there”, in the void, they do exist other people too, willing to meet us through listening to us.

In Share*Dots project to dare to send the message (to share) is actually the prompt to action even when based on a vague sense of the others’s presence.

It is learning to trust the flow even in the absence of clear signs for navigation – exactly what our times require.

So, the Share*Dots project structure maybe symbolizes in practice the original existential mood of my “personal film”. That is:

doing actively something in the emptiness of our times yet also in the warmth of other people radiating presence not on a mental level but on a deep, intuitive and abstract one.

Moreover, I hope this mood would be congruent with the necessities appearing in our times and that it inspires an energetic stance instead of passivity.

I know that this modality of sharing will be somehow risky

for some participant and that probably many would be surprised by not seeing the usual group processes.
In such cases I try to explain the best possible my ideas while supporting of course the possible participant’s inconvenience.

Besides, on the other pole, there is someone who lectures on some topic in internet and all receivers in this “lecturing format” are listening to the words passively, having accepted that in a lecture there are not happening the usual processes of a group session.

So, after all, let us consider Share*Dots project somewhere in the middle, a new kind of proposal for online meetings.

Finally, sharing is optional and this is respecting each participant’s personal process.
And the fact that usually there is no time for all to share, is counter-balanced by the importance of just being in such a field in one’s own way.

Of course all this has nothing to do with an open discussion based on arguments.
And regarding the conducting, I co-ordinate in a very basic way the meeting, though I am always highly attentive on its flow, staying close to the original inspiration and “holding” firmly the co-created field.

Till now, till the 2nd round of autonomous meetings, “Share*Dots project” seems to go on very well, justifying its origin (the 1st round included one meeting in Greek and one in English language).

People seem very eager to participate in this experimental format.

The participants’s comments are overall very positive.
They especially respond much to the existential mood prevailing the meeting, while intuitively understanding easily the project’s deeper conceptual core.

Next steps will of course provide more data, and as times change (though still on the edge of threat), this project of video meetings will hopefully engrave its course adjusting to these changes.