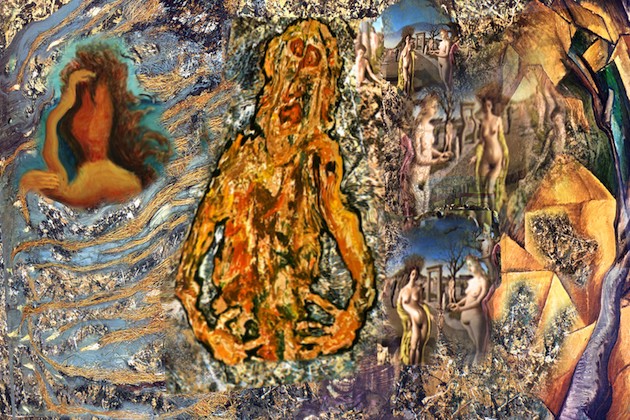 » BOOKS » NOTES FOR YOU » c. full texts with their images » 6. Two transparencies

“No, I don’t want marmalade,“ he tells her and continues chewing his biscuit. She wonders,

“But you always ask for marmalade.” He looks at her, doesn’t say anything, quietly takes another biscuit. He has been resisting her lately.
There are small but numerous, clear signs. He looks at her differently. He talks to her differently.
His hand on her skin is no longer so restless and alive, uneven in its anatomy as he caresses her. Rather, his hand has become a neutral unvarying surface, barely flexible.

The woman is worried about these signs.
Mostly, though, she gets angry and resentful, becoming a child who has to deal with an unknown and resisting world.
She gets angry because he dares to differ from her image of him, constructed in her inner universe.
For her, even the suspicion of a change in him symbolized by this “marmalade event”, is indeed an impudent invasion of her property (if it were possible, she would shove three jars of marmalade into his mouth).
Day by day, this man whom she knew inside out seems to attack and destroy his own reflection in her personal reality.
He seems to have become an enemy of the sketch of himself, that sketch that she has been drawing for so long in her perception, with such commitment and thoroughness.

But now, as if he and his image were drawings on two transparent sheets of gelatin,

she attempts once more to put one on top of the other. Their outlines don’t match. She doesn’t know what to do. Should she tear both the transparencies? Should she crumple one,  throw it away, and keep the other?
Yet she is needlessly confused.
Whatever she does with the transparencies, she cannot erase that distinct, permanently unsatisfied, eternal thirst in her very depths.

Naturally, this kind of thirst also exists in the very depths of each one of us – it simply becomes alive and intensely discomforting in such situations as this woman is experiencing.
It is a blind thirst, an urge to wildly pull the Other onto us in an eternal embrace. An embrace that will totally erase the Other from the outer world, that will force them to melt onto us and get sucked through our pores.
And as we metabolize the Other, they will finally come faithfully to fit the mold that is prepared and waiting inside us. A mold like an open mouth, hungry for the Other, empty from that very first moment when we were born, thirsty for the Other from that critical instant that we were thrown out of our mother’s body and this world appeared for the first time before our eyes.

dares to jump out of his image – an image that had been built like a crypt in the depths of her inner universe.
The man pushes away the jar.
He has no idea that his role is to fit into that crypt, to fit into an ancient uniform already sewn and ironed by the woman speaking to him.
However, for some time he too has already been feeling something similar to the woman’s experience. For a few weeks he too has felt  that his usual internal image of her is resisting, starting slowly to escape him.
And he too wonders how this woman, so desirable and intimate until now, can seem so different, so vastly foreign, so unsuited to her reflection in his own personal reality; how is it possible that she is leaping so cruelly from his embrace?
“No, I don’t want marmalade now,” he insists.