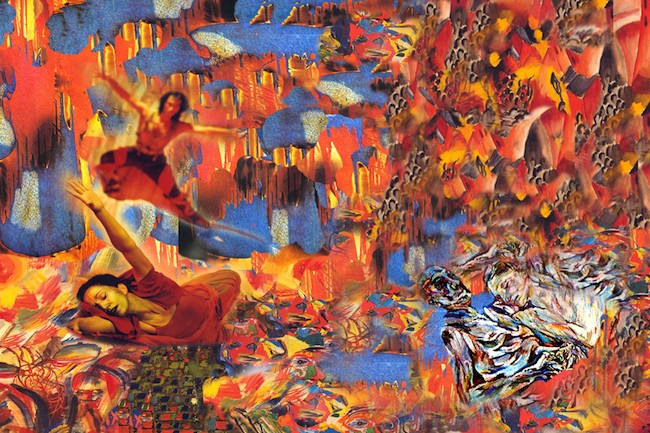 They are indifferent to the other people around them.

They sip their coffee as slowly, as delightedly, as the delightful flow of moments between them.
They are sure that people at the nearby tables are talking about them.
They do not care, since the space between them as they sit facing each other is extending, transforming itself into a new, vast and completely private territory inaccessible to anyone else.

What they are experiencing is a huge balloon, playfully inflated by their emotions and concealing the horizon,

deleting all other people and objects. What they are experiencing is painted on the canvas of what happens between their eyes, as they embrace each other with their glances. Thus, what they are experiencing has the weight and the tenderness of a beautiful piece of velvet.
The raw material of their precious moments consists of very usual everyday words about very usual everyday things.
However, as these simple words flow between them they seem to carry all the wisdom of the world, shaped by the greatest joy that a human heart can endure.
And in this flow of words, from time to time there shine colorful diamonds made up of carelessly flowing sounds of laughter.
Every now and then, short moments of precious silence pop up, firmly founded on their hands: four hands longing to touch, skillfully dancing between cups of coffee, glasses and biscuits, so as to enjoy brief instants of affectionate caress.

They met only a short time ago but their encounter was a summer storm.

“I knew you even before I met you,” he wants to tell her – and she wants to tell him the same.
They both believe that their meeting each other has been the most natural event in the world.
An event which had waited patiently to be produced by a very special kind of synchronicity, emerging when a perfect moment explodes into reality.
They both believe that their encounter is by now crystallized in time as well as potentially happening again and again, through all eternity.
In other words, they are absolutely sure that the powerful Eros they are experiencing is already a great love, an eternal love, a never-changing temple of mutual worship and perfect harmony.

They emerge into the street. She quickly kisses him and runs towards the metro, light as a drop of morning dew that rolls on a leaf.
His admiring eyes proudly embrace her as she disappears into the crowd, still filling the entire visible and invisible world.
In a few seconds she will be a warm but omnipresent absence.
She will be absent, yet present by his side and all around him.
This is why whatever he knows from his past experience of Eros is swept away by the unmeasurable force of this new Eros.

So it is with Eros. It does not matter that the Other is never anything more than

an amazing mirror, even if the Other is magnificent. It does not matter that in Eros we soon reach through the silvery surface of this mirror with our hand.
Nor that later, reaching behind the mirror and beyond the glittering mercury, what we touch is nothing but reflections of our own selves.
And still it does not matter that when, even later, we usually mourn the loss of Eros, we are in fact mourning the loss of myriads of fragments of a mirror – actually of our fragmented reflections that had been hosted in that mirror.
Nor that if we struggle to gather the fragments, uselessly hoping to put them together again, we sometimes bleed.
Not one of these side-effects of Eros matters at all.
Because the Others available to us as our mirrors are countless, so countless will be our chances to experience breaking into fragmented reflections again and again.
Besides, nothing is able to cancel our fundamental need to dive from time to time, in one or another way, straight into the tremendous experience of Eros itself.